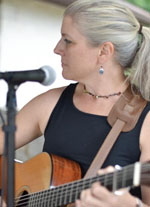 Mrs. Goodney holds a Bachelor of Music Education from the University of Georgia and a Master of Education in Educational Leadership from Ohio Dominican University. Prior to teaching music, she was a Language Arts and History teacher, a director for several musical productions, and started a community children’s choir in Oxford, Ohio. Mrs. Goodney taught at Cassingham Elementary from 2013-2018, then graduated to the middle school. For the past few years, she‘s had the pleasure of being the music director for the Elementary and Middle School musical productions, and has also taken on the role of Intermediate Strings teacher at the elementary level.

In 2015, thanks to grants from BMP and BEF, Mrs. Goodney brought Grammy-nominated musicians Peter Cooper and Eric Brace to Bexley Schools, where they worked with students on songwriting. Students co-wrote a few songs with Brace and Cooper, including Leaving Cassingham, which was professionally recorded in Nashville. It’s still played every year for Cassingham’s 5th grade celebration. In 2018, also through significant grants from BMP and BEF, she invited the Freedom Sings band, along with host, Ken Paulson, former President of the First Amendment Center of the Freedom Forum Institute, to present a powerful program about music and free speech to Bexley 5th-8th graders.

Mrs. Goodney loves to sing, and play the guitar, piano and upright bass. Musical pursuits outside of the classroom include playing in a bluegrass band and enduring pop concerts with her daughters, who in return, endure her bluegrass gigs.