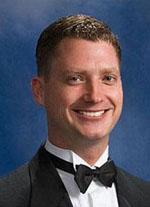 Andy has performed throughout the United States, Canada, Germany, Austria, and former Czechoslovakian Republic on trumpet as well as various concerts under the direction of Frederick Fennell, Mark Kelley, Francis McBeth, Myron Welch, H. Robert Reynolds and has studied conducting with Terry Milligan from the University of Cincinnati. Andy has lived and taught in Bexley since 2007.