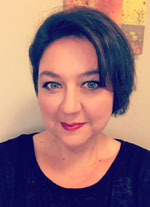 Amy Johnston Blosser is the National Chair for Repertoire and Resources for the American Choral Directors Association (ACDA). Prior to this position she served as the National Repertoire & Resources Chair for Senior High School choirs and for Central Division. As R&R Chair, Blosser has been active in planning Division and National Conferences in Los Angeles, Chicago, Miami, Oklahoma City, Dallas, Salt Lake City, Minneapolis and Kansas City. Blosser is a contributing editor for the Teaching Music Through Performance in Choir, Volume V (2019). Ms. Blosser is also a member of The National Association for Music Education (NAfME).

In her sixteenth year as Choral Director at Bexley High School in Columbus, Ohio, Amy Blosser conducts six choirs grades 7-12, serves as music director for annual musical productions, and is the Fine Arts Department Chair. Under Blosser’s direction, the Bexley High School Vocal Ensemble has performed at state conferences of ACDA in 2007, 2009, 2011, 2014 and 2017 and NAfME in 2009, 2011, 2013, 2016 and 2018. In March 2012, they performed at the ACDA Central Division Conference in Fort Wayne, Indiana and in February 2016 in Chicago, Illinois. Her choirs have toured throughout the United States and Europe, performing in notable locations such as Lincoln Center, Carnegie Hall and St. Patrick’s Cathedral in New York City, St. Mark’s in Venice, St. Nicolas in Prague, St. Stephen's Basilica in Budapest, St. Stephen’s Cathedral in Vienna, Canterbury Cathedral in England, Notre Dame in Paris and St. Patrick’s Cathedral in Dublin, Ireland. They have shared performances with ensembles from The Ohio State University, Capital University, Ohio University and Baldwin Wallace.

Blosser has been a presenter, adjudicator and guest conductor throughout the United States. She was named Educator of the Year for Bexley Schools in 2011 and was selected to serve as a Conducting Fellow for the 2015 International Conductors Exchange Program to Sweden. As one of the 14 fellows, Blosser represented the United States by traveling to Sweden in October 2015 and hosting Swedish conductors in February 2015. She won second place in the Youth & High School Conducting category for the American Prize, a nationally recognized honor.

Blosser holds a Master of Music in Choral Conducting and Bachelor of Music Education from The Ohio State University in Columbus, Ohio where she studied with Hilary Apfelstadt and James Gallagher. In addition to her work as a high school choral educator, Amy Blosser is the Artistic Director of the Bexley Choral Society and the Director of Music at Bexley United Methodist Church, where she has served since 2012.